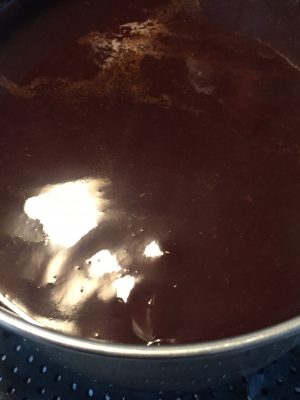 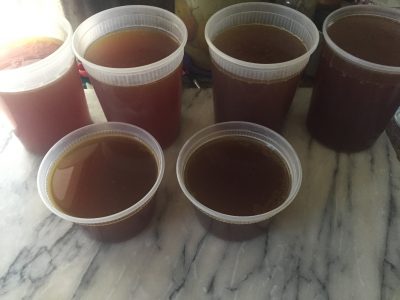 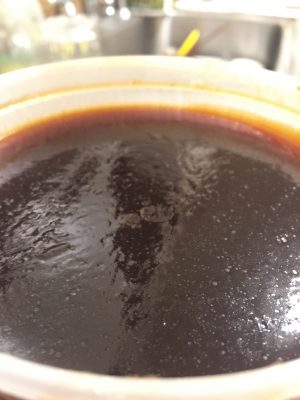 Part 1 – Introduction to reduction stocks and glazes, or glace.

At a meeting around the grill with a few friends this past summer, or early autumn, one of them brought over some wild boar tri-tips for me to grill. After they were done, I sliced them super thin and ladled some freshly made veal demi-glace onto the dish and fed them to the gang. The food was quite well received and one of my buddies said, “Man, you have got to give me the recipe for that sauce.” to which I replied, “How much time have you got?” and left it at that. Later I got to wondering exactly how I could share the recipe and not skip over the details. Well, here you go chum. Here’s the recipe, in the only true way I know how to share it.

For me, preparing food is a labor of love and sharing my joy and sheer pleasure through writing when I’m not actively cooking is almost equally as rewarding. That’s why there was never going to be a short version of this article, and why there is no quick, simple way to rattle off a recipe.

After years of donning a coat and apron, one of the more enjoyable and finer parts of cooking is the ability to make intensely flavored reduction sauces at will and with little mental bandwidth because I’ve been doing it so long my hands tend to work on their own. I find it most relaxing because during the process, my mind remains free to wander. Time and temperature do all the cooking – I’m merely the attendant.

We’re here to discuss brown stocks and what happens to them when you make them well and intentionally cook the vast majority of their volume away in order to achieve results such as traditional meat glazes, or glace. I’m happy to admit that terms such as Glace de Viande (Meat Glaze), Glace de Volaille (Chicken Glaze), Glace de Poisson (Fish Glaze) and Glace de Gibier (Game Glaze) were never part of my daily nomenclature. Through the processes of experimentation and practice I backed my way into meat glazes, referring to them as “reduction sauces” or “pan reductions” without really knowing what they were at first, or their function in higher end French, Escoffier styled kitchens.

My discovery of meat glaze was purely coincidental, or better described as an “intentionally unintentional” byproduct of my journey into making stocks. Over time I started to achieve consistent, quality results with chicken stocks and ultimately started experimenting further. I began to fortify the basic stocks with meat and bone additions later into their cooking period, always topping them off with additional water, then further reducing them again by 50% of their initial volume.

I could produce highly gelatinous stocks which had a great shelf life if they remained covered in the refrigerator, though they wouldn’t last forever. Generally, the stocks lasted longer if the fat cap were left in place until use. Ultimately, they would spoil if left to linger too long so I began to freeze them and store them. Eventually, much like that infamous chocolate factory worker from Cleveland, Ohio, my ambitions outran my storage capacity. I reached my internal zenith and began to stir and yearn for another option, so I began reducing my “reduction stocks” in a series of stainless steel pasta boilers and a set of old, conveniently decreasing in capacity, copper-clad Revere Ware pots. It was the perfect chemistry set for a home bound cook who hadn’t yet turned kitchen pro. Those pots still hang on my rack today and are now the dominion of my darling wife, though when it comes time to bringing a stock down to a glaze, they’re still my trusted long-time friends.

Of course, no meat or vegetable based reduction sauce would ever be made without some fundamental, foundational knowledge about making stocks. There’s a multitude of good information out there about making stocks and broths – so I’m not going to repeat them here. There are as well commercial products available which are tremendous time savers – though not many of them are going to be the vehicle you’ll want to ride in when it comes to going down, down, down into the inner realm of 4:1, 8:1, 10:1 and 20:1 ratio reduction sauces…

When I talk about reduction ratios, i.e. 4:1, 8:1, etc. I’m talking loosely in quarts or overall quantity. A 4:1 reduction would be exactly that – a gallon of stock into 1qt of reduction. But it doesn’t make much sense to say, “a 40:8 reduction” when we’re talking about larger volumes, so I will usually present that as a 5:1 as well. It’s a bit of my twisted math which makes perfect sense to me. Maybe that’s why I cook for a living rather than design rockets.

Once you reduce a decent stock by 4:1 or 5:1, pretty good things happen, and these reductions make even more flavorful, versatile sauces if a few ladles full are further burned down in a sauté pan and finished with some butter just before being served. The 5:1 simply intensifies the flavor and reduces the yield. 8:1 is common when we want to get more “glazey”. At this stage, the intensity of these sauces starts to really kick up. Watch how you season the proteins you intend to finish with this sauce or you can easily overpower a dish.

From 10:1 to 20:1 – we’re pretty much talking about a true glace. As I’ve hinted – it’s kind of fuzzy math and the ratios serve as an indicator of how far you want to go with a reduction to achieve desirable results. What really matters in the end is the flavor and secondarily, the density, or viscosity of the reduction.

Once you start working toward the 20:1 ratio (5 gallons into 1 quart), which seems – and is excessive, the reductions as a stand-alone sauce become too wild to serve to most passers-by and certainly aren’t for public consumption in a restaurant due to their intensity. The fact is, they were never intended to be served as the sole component of a sauce, though they can be quite a bit of fun for personal experimentation that way.

They get “gluey”, which is a character I quite like on certain things, but that doesn’t mean the next guy will. They get to a point where a little dab’ll do ya’ – perfect for spoonful-sized additions to boring soups and broths, or under-seasoned meats or poultry when added to their natural jus and mounted with butter. They bring otherworldly intensity when served in the correct proportions and what that proportion is, is entirely up to the tastes of you and those around you.

After you get used to making reductions “raw” or “naked”, with just base stock elements and nothing fancy, you can further push the boundaries by taking your raw glazes and adding to them pepper pastes, additional mirepoix or veggies, or going completely nuts and reconstituting some in water, adding more meat and veg and reducing them again… But the uses for them are wide spread if you don’t monkey around in the beginning.

One area where I diverge from what many might consider “best practices” is in the recommended time to make stocks. I’ve read various simmer times which are all over the map, and mine are much longer than any I see on the internet and longer than most people would ever take to make them.

I’ve been known to roll a pot of fortified chicken stock for far more than 24 hours, which some would find preposterous. I guess, pardon the pun, what it boils down to, is application. What is it you’re intending or trying to do? I know of very few restaurants in the land where stocks are simmered for the countless hours I’ve been known to simmer them. The cost prohibitive nature of the business doesn’t allow most places the time or money to have a witch’s brew on the stove for multiple days. Not that I’m recommending this process for any and all preparations, but I’ve never met a stock which boiled for 4 hours that couldn’t have gone for 6 or 12. For the average home cook and even the intense foodie this is a ton of work which requires patience – which for me has been cultivated over years. The time commitment alone is a big one.

It also requires a loving spouse, roommates or partner to look past the odors, humidity, serious lack of stove space, mess and everything else which comes with pulling these sauces off. Tread lightly and take your time. As you progress from chicken to beef or veal the entire game changes. Even 14 hours for a poultry glace could drive a partner bonkers. 60 to 70 hours for a seriously huge batch of veal glace and all that comes with it is no laughing matter, certainly for those who don’t share an interest in what you’re doing. A multi-day project in the kitchen won’t sit well with everyone, so keep that in mind should you elect to continue on this journey.

When it comes to making stocks, I have a few rules to which I strictly adhere. My first hard, fast rule for chicken stock is a minimum cook time of 6 hours. I feel like I’m losing something if it goes for less – unless I’m making broth and not stock. Essentially, if everything left over in the pot after straining is almost unrecognizable, then I feel I’ve gotten my money’s worth. Though I do admit to being a fan of the stock pot treasure hunt and rooting around for little bits of tender veg and meat which might have made it past the sensors. The meat is often unrewarding at this stage, but the tender carrots can be wonderful, so I often cut them a little larger than normal during my initial prep to make them easier to retrieve.

My second hard, fast rule is that everything must be brought down by near half if my desired end-result is a deep, gelatinous reduction. These days pretty much everything always is. If I’m after volume I won’t bring the stock down so much, rather I’ll fortify, refill and only bring it down by 25% – but only after I brought the original batch down by 50. In essence – the first time around the stocks are always reduced by half. If that’s my desired end-point, then my work is done. Once again, it depends on what you’re after and how you intend to use the stock in a finished product.

My third hard fast rule is mostly universal. I do not salt my stock, ever, for any reason. If you’re making broth for a soup it’s one thing, but when making condensed stocks and ultimately glazes, the addition of salt will make for an inferior product in the end. The natural salts extracted during the reduction process are further concentrated and intensified as the liquid evaporates. It leaves an unrefined, often metallic in flavor, mineral-laden backbone to your finished sauces that’s impossible to mask or escape. The problem escalates further when your sauces steep in stainless-steel pans in an overheated bain-marie for hours on end. Furthermore, salted stocks lead to even saltier dishes down the road, certainly in a restaurant environment when the next guy comes along and after using your stock, visually “salts a dish to taste” and ends up sending a salt-lick plate out to one of your guests.

I love salt. I think it plays a vital role in most aspects of cooking. But when overused, or in the hands of an uncaring employee, or worse, a line cook with the palate of a German Sheppard, who also happens to not care… things can be disastrous. Which leads to another discussion about always tasting your food through its progressions, but that’s another topic for another day.

Stay tuned for part 2, where we dive deeper into the kettle, and begin to get into the nitty-gritty of the “Glace de what ever you want” process.