From left to right: A slicer I rescued from a closing restaurant. A mixture of Sabatier chef knives – many of which I’ve had for near 30 years.  A Wustof Santoku and a Henkel pairing knife. The cleaver is Kiwi from Thailand and holds a great edge. You swing it – it cuts. Otherwise it hangs on the wall looking good.

The butchering blades are Victorinox – and I can’t impress upon you enough how dangerous they are – out of the box they’ll cut you in two. Be sure to stay opposite of the business edge.

The travel bag is also a 30-vet of the road. An old Henkel I believe. The blade guards are all brand new Everpride (thank you mom!). They’re easily customizable with a pair of scissors, which was necessary for the proper fit on the cimiter.

The knives are maintained using a pair or #1000 and #5000 grit Global Whetstones from Japan. 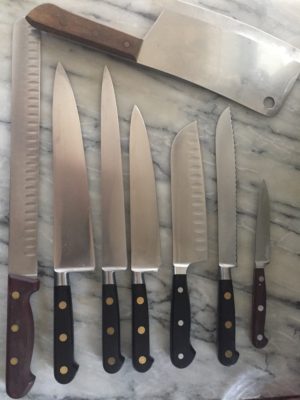 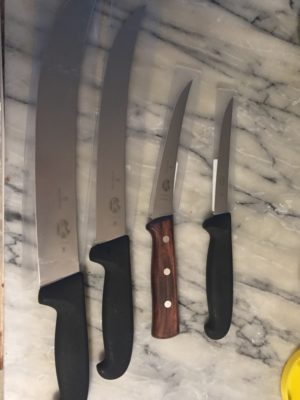 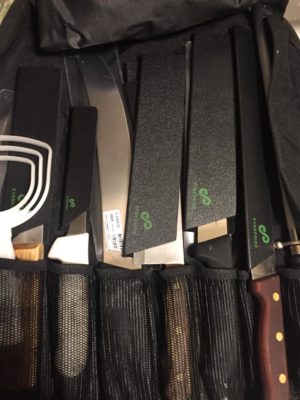 The Sabatiers are my workhorse blades and handle 99% of what I do. They’re incredibly durable, having never been machined after leaving the factory. I rarely have to take a stone to them and they’re usually kept serviceable and in spec with a quality steel. The smaller 8-inch French had its heel modified several years ago. I used a wheel to round off the bottom of the heel so that I could work a scallop out of the rear of the blade which prevented even sharpening.

The scallop in the blade is natural and develops after years of use. I remember several knives like this in my grandmothers knife drawer. Many times you’ll notice scallions and chives won’t cut completely through while mincing… and this tells you it’s time to go to work on the blade. The same thing happens with warped cutting boards. But this section of the blade got worn and has been fine – post modification. The Japanese seemed to figure this out long ago with their knife designs and eliminated the problem. For me – a grinding wheel or a Dremel tool is the perfect fix.  The 12-inch French is waiting for the mod – as it too is showing the same symptoms. I’ll be sure to post here when I fix it. The Santoku of course doesn’t have this problem.

For as much as I protect them, I do tend to beat the snot out of them over the course of regular use. Regular use being that I only use them for food prep. Turn your back on them in a commercial kitchen and you could find one of the prep cooks trying to open a can with one – so always be on guard. For some silly reason I protect my Santoku more than the other blades. I only use it for fine mince work and will always reach past it if I’m going to be banging around on bone or a less-than-favorable cutting surface. I rarely bring it anywhere if I think someone might swipe it, never loan it out and warn my wife profusely how sharp it is if she ever tries to use it. It’s another one of those blades that you must show a good degree of respect for. It’ll open you up with a quickness. Not to say my utility knives aren’t sharp, they are. But the Santoku and the Victorinox are on another level, mostly because I baby them. They in fact have their own private sharpening steel – a Zwilling J.A. Henkles 12″ Stainless… The 12″ is to accommodate the cimiter.

I’m not a big believer or fan of specialty blades and one-off use knives. For garnishing there may be a few exceptions – but the bulk of your work as a cook will always be done with the most common blade styles. The only “single purpose” knife I have is a sushi blade – which aside from cutting through Nori and rice – is only used for filleting fish. I don’t break it out for anything else. My pairing knife is a limited use knife which I reserve for brunoise of shallots among other things. If you ask me – small knives are more dangerous than the large ones. At least I’ve done more damage to myself with them. They seem to be fine for small people – but not me… I try to use them sparingly. Truth be told, you can do almost anything with a single decent blade. I’m reminded of this every time I pass through a store and see another knife I’d like in the block. It’s a temptation I can hardly resist.

As far as sharpness is concerned… always try to keep them sharp. This of course is easier if you buy quality blades from the start. I have a few surgical steel (stainless basically) Japanese blades – which are cheap – and can be sharpened to the point of being scary. But they don’t hold an edge worth a damn and need constant upkeep and stone work. They also don’t work very well on stones made for higher carbon blades – so they’ve been pulled from service and get used rarely. The large french is nice for spatchcocking chickens and the 6-inch boning knife lives in my block for certain tasks – but they’re not really what you need in a commercial environment, as they dull too fast and become inferior by the time service rolls around.

The only dull knives I like are little, itty-bitty pairing knives for cutting mellon. They needn’t be super sharp. They also work well for cutting vegetables for stock and stews where you press the food down into the blade with your thumb. I’ve tried this with my Henkle pairing blade and only ended up drawing blood – so the little dull fruit knives also serve a purpose if you’re unwilling to modify your technique.

Inevitably , if you get into a professional kitchen you’re going to encounter Dexter Russel knives or some variant of them. They have white or creme colored polypropylene handles and what can best be described as spring-steel blades. If you work in a cheap place, they’re usually going to be old, dull, heavily abused, often with broken tips, chips and sharpened into boomerang shapes. If you work in a place where a knife service picks them up and trades them out on a regular basis – they’re as good as gold when they come back from being milled. Be sure to take a peek around before you run out and buy good blades. Just don’t be a dildo and spend a fortune on a hand-hammered Damascus blade set, polished to razor thin perfection on strops made from the backsides of baby harp-seals – or some other silly shit… Save the boutique blades for your home collection. I can only see heartache if you buy them for your first commercial set.

If the establishment you’re in keeps them in good working order and there are plenty to go around, you can save yourself some dough and use theirs. Often though – the AM prep gang will take them and horde them – stashing them in lockers, rolling them up in towels, hiding them under cutting boards and nestled between or inside reach-ins, making them hard to come by. If you’d like to work reliably you’re going to need your own bag. The thin blade Dexters are practically samurai swords when they’re new out of the box – so keep you’re fingers back and your knuckles flat…

My smaller slicer and bread knives are for pretty much that – slicing roast filet or sawing through bread crust. They probably see the least amount of action. I have 3 or 4 boning knives which only really vary in blade thickness. The flexible blades are for tearing down larger beef cuts and the firm blades are for when I need a little less dexterity in what I’m cutting. In general – the more intricate the cut – the smaller and more flexible the blade. In the end, my two main knives are the 12″ and 8″ French. Without them I think I’d feel lost.

One last note about your blades – don’t go to great lengths to maintain ultra-sharp points on your most used knives. They’re rarely needed and will most often only hurt you or others. There’s no sense in keeping your knife bag like the inside of a sharps container in an emergency room. Respect what they are and their main functions and purpose – and hopefully you won’t find yourself in one…

As Jacques would say… Happy cooking!