The Mightiest Meal in the Kitchen – Beef Bourguignon 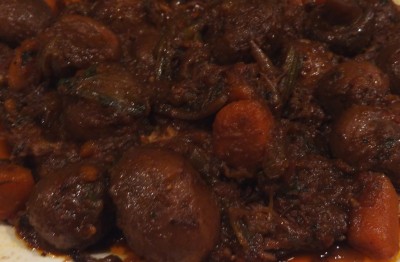 Everyone has their own style – in everything they do. To me the king of the kitchen – other than legs of venison or whole-hog BBQ, has to be Beef Bourguignon.

The inspiration for the dish comes from several places and people. I tend to like mine cooked into a gelatinous form of meat and vegetable medley, where the pearl onions have dissolved into the sauce and the beef clings to its form by the tiniest of connective protein fibers. That’s an elaborate way of saying that I like to cook the hell out of it.

I like the meat to fall apart. I like the vegetables to be soft beyond all belief yet still hold their shape. I like the mushrooms the be whole stuffer mushrooms when they go in so that they are big and steak-like when they come out.  I like mine done in 100% wine if I can and cut with very little stock. I like the intensity of the flavor.

I must admit that my version of Beef Bourguignon regularly devolves into a big, heaping stew. And I do not mind a bit.

There are times when I modify my approach to the dish depending on the intended audience. If there is any dish that turns me into a myopic madman during preparation – this would be the one. It is a lifelong journey of attempting to reach perfection in the art of slow braising (which I do mostly on the stove-top but occasionally turn over to the oven). The challenge with this dish is that it is an exorcise in trying to regulate the flavor of a dish as it will be many, many hours down the road.

At some point I may elaborate on process and procedure – but for now – take this recipe as a good place to start. Ultimately, after you do it a few times you will be off on a journey all your own…